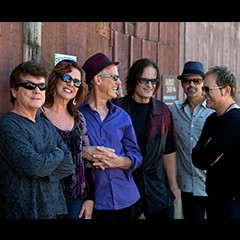 Ambrosia, the band known and loved by a multitude of fans since the 1970’s, is now more alive and compelling than ever. This 5-time Grammy Nominated ensemble is exploring new musical territory and bringing an exceptional musical performance to stages everywhere.

In 1970, four young musicians from the South Bay of Los Angeles, came together to create a new moving and invigorating style of music. Joseph Puerta, Christopher North, David Pack, and Burleigh Drummond produced a sound that was immediately recognized. Today, Ambrosia is three of the original members with the addition of guitarist Doug Jackson, contributing keyboardist Mary Harris, and powerful lead vocalist/acoustic guitarist Ken Stacey.

Always exploring the possibilities of progressive, classical, and world influences – with tangled roots of soul, rhythm, and blues – Ambrosia is continuing to entertain their original fans while still engaging newer audiences.

During Ambrosia’s early recording history they garnered 5 Grammy Nominations, received frequent radio airplay, and gained the admiration and respect of the musical community – in addition to their sold out concerts around the world. Ambrosia achieved 5 Top 40 hit singles on Warner Bros. Records, released between 1975 and 1980, including “How Much I Feel” and “Biggest Part of Me”. In 2015 the group released a new single, “Hopes and Dreams”, which was featured on the series called The Sparrows that aired on the Fox television channel. As of 2017, the new Ambrosia material keeps coming.

Bringing a breathtaking performance of their classic hits as well as new moving music, Ambrosia puts on a perfect show for any stage, casino, night club, festival, or special event.

“That’s how you do it!”
–Jimmy Fallon (accolades from Jimmy himself after performance on the Jimmy Fallon Show)

“With a solid set list and captivating performance, it’s evident that Ambrosia still has a lot in the proverbial rock tank.”
–Steven Neff (Music Enthusiast Magazine)

“Ambrosia is one of my favorite bands. These guys are just wonderful to see live and hear their beautiful music. True and absolutely professional musicians. That’s why I keep going to see them every year.”
–Bluesman (Review posted on Goldstar)