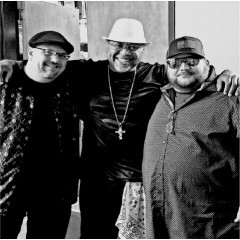 They're thrilled to be back on board and look forward to meeting and hanging with everyone!  Drop a dime online and say hello!