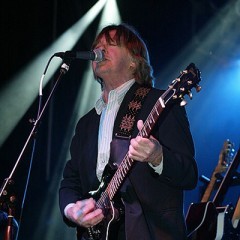 From their legendary lineup, Joey Molland continues the unforgettable legacy of BADFINGER.  One of the original signings to the Beatles’ Apple Records label, they had their first hit single with a Paul McCartney penned song, "Come and Get It", which went to #7 in the U.S. charts.  Badfinger followed this with their own compositions "No Matter What", "Day After Day" (produced by George Harrison), and "Baby Blue", which went to #8, #4 and #14 respectively.  During this time American singer Harry Nilsson placed Badfinger's song "Without You" on top of the charts, and Mariah Carey did the same in 1994.  Their most legendary album was "Straight Up" which featured two of the aforementioned hits (Day After Day and Baby Blue). Including 5 tracks written by Joey Molland, Q magazine described Straight Up as "brimming with mature melodies and bracing verse/chorus interplay", while NME deemed it "[a] stone cold beauty of an album" and advised: "Love it like your mother …"   The album, which featured 4 tracks produced by George Harrison – and benefited from his slide guitar magic – stayed on the Billboard Top Pop Albums chart for 32 weeks.

VH1 produced a "Behind The Music" documentary about the band, whose songs continue to heard in films (The Departed, etc), on television (Breaking Bad finale et al), and of course on Classic Rock and oldies radio; Harry Nilsson's version of "Without You" was featured in the 2016 film starring Tina Fey, "Whiskey Tango Foxtrot".  Joey Molland and Badfinger played on John Lennon's Imagine album and joined George Harrison for the Concert for Bangla Desh. Badfinger is one of those rare acts to re-enter the charts with one of their classic songs: in the aftermath of the Breaking Bad finale, "Baby Blue" re-entered the charts and introduced a new generation to the music of Badfinger.