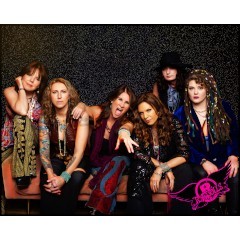 RagDolls – The Ultimate Aerosmith Tribute is dedicated to recreating Aerosmith’s iconic sound, energy and stage presence with their well-tailored, high voltage live production. Covering all of the recognizable material from Aerosmith’s five decades as one of America’s rock & roll legends, RagDolls deliver blistering true to sound reproductions for fans of both the classic rock period as well as the more recent MTV era hits.

These women of rock pay homage to the Bad Boys from Boston in full regalia, paying special attention to the little details that define a genuine Aerosmith experience.  Vocalist Susie Major gets in your face with her Steven Tyler-esque wails and stage antics, while Ali Handal rattles your eardrums on lead guitar with all the grit and bluesy appeal that is Joe Perry.

The band is sure to leave you with the same Aerosmith buzz you’d expect from the real thing  – The Screams, The Swagger, The scarves, with a cherry on top…