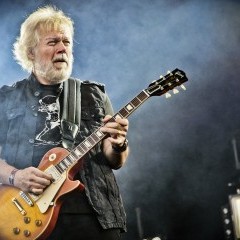 Born in Winnipeg, Manitoba, Canada, Randy Bachman is a legendary figure in the music world through his talents as a guitarist, songwriter, performer, and producer. He has earned over 120 Silver, Gold, and Platinum album/singles awards from around the world for his recordings. His songwriting has garnered him the coveted #1 spot on radio playlists in over 20 countries, and his total record sales exceed 40 million albums and singles. Randy’s songs have been recorded by numerous artists, and placed in dozens of television, movie, and commercial soundtracks. His music has provided a veritable soundtrack of the last 40 years of popular music.

Randy first scored chart success with his band the Guess Who in 1965, with single “Shakin' All Over” — a #1 song in Canada and #22 single on the Billboard Hot 100. Four years after this initial success, the spotlight would shine once again on these young Canadian boys. With steadfast determination and tenacity, the group worked their way to the top of the charts in spectacular fashion. Between 1969 and 1970, the Guess Who enjoyed an unprecedented run of singles on the Billboard charts, beginning with “These Eyes,” followed by “Laughing,” “Undun,” and “No Time” — all products of the gold-plated Randy Bachman-Burton Cummings songwriting team. Capped off by a three-week run at #1 with “American Woman,” the Guess Who virtually owned the pop charts that year, selling 5 million singles — more records than the entire Canadian recording industry, and even outselling the Beatles.

Health issues, along with a desire to spend more time with his young family, resulted in Randy leaving the Guess Who in May 1970 at the height of the band’s success. While his decision stunned the music world, Randy knew that he could never leave music behind. He soon formed Brave Belt, a country-rock outfit that, with the addition of powerhouse singer Fred Turner, ultimately transformed into the hard-driving Bachman-Turner Overdrive. While the Guess Who made Randy’s music heard by North Americans, Bachman-Turner Overdrive eclipsed his previous accomplishments by making his music international with hits in dozens of countries around the world. BTO’s impressive list of hits include the rock anthems “Let it Ride,” “Roll on Down the Highway,” “Takin' Care of Business,” “Looking Out For #1,” “Hey You,” and “You Ain’t Seen Nothin’ Yet,” which topped the charts in over 20 countries.

Randy’s career has been built on his indomitable drive and dedication to music. He has released numerous solo albums throughout his career while simultaneously writing and producing other artists, including platinum-selling Canadian classic rockers Trooper in the 1970s. Randy’s songs have been recorded by a wide spectrum of artists — including Lenny Kravitz, whose version of “American Woman” topped the charts 29 years after the original — and have appeared on numerous television and movie soundtracks including Seinfeld, The Simpsons, American Beauty, and Austin Powers 2.

Presently, Randy continues to be a highly in-demand songwriter, session player, and solo artist. He also hosts the critically acclaimed two-hour radio show Randy Bachman’s Vinyl Tap, heard by millions across North America on CBC Radio and Sirius XM. His love of the guitar, and a determination to support several unsung or legendary guitar greats — including his early mentor, the jazz-guitar genius Lenny Breau — led Randy to found Guitarchives Records, whose goal has been to rescue and release otherwise lost guitar music. Randy further paid tribute to Breau by taking a jazz turn with his acclaimed 2006 album Jazz Thing, which revealed the rock guitarist to be comfortably adept in a cool-jazz context.

In recent years, Randy has enjoyed tremendous success both live and on CD and DVD with his Every Song Tells A Story multimedia concept, sharing the stories behind his best-known songs, which has turned the veteran rock star into Canada’s favorite storyteller.

Never content to rest on his impressive laurels, in 2017 Randy embarked on his most ambitious project in many years, taking the music of one of his personal heroes, Beatles guitarist George Harrison, and reimagining many of Harrison’s best-known songs in a contemporary musical context with all new arrangements. By George—By Bachman became an international sensation on release the following year.

Randy Bachman has played an integral role in the evolution and growth of the Canadian music industry, and continues to serve as both an inspiration and impetus for others to succeed. The 2018 acclaimed full-length documentary film Bachman, written and directed by award-winning director John Barnard, brings the oft-described architect of Canadian rock ‘n’ roll’s story full circle with an insightful retrospective of his many remarkable career milestones, while continuing to look forward to what is still ahead. With no plans to retire, the man who once wrote “Rock Is My Life” continues to focus on creating new music. Though his music industry awards include dozens of coveted acknowledgments of legendary achievements, when asked which award is most prized, Randy responds, “The one I haven’t got yet.”