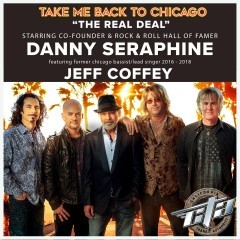 Chicago co-founder and Rock & Roll Hall of Fame inductee Danny Seraphine, the show also features Jeff Coffey former lead singer of Chicago from 2016 - 2018, and the world-class band CTA perform the legendary music of Chicago including hits like "25 or 6 to 4," "Feeling Stronger," and "Saturday in the Park," "Hard Habit to Break," "You're the Inspiration," and "Look Away."

The 75 - 90 minute show features over 25 hits. Danny also shares his stories about his experiences on the road with Chicago, which with over 130 million albums sold, had become one of the world's largest and most beloved rock and roll bands.

"Danny Seraphine is one of the top five living drummers in the world." - Larry Thomas, CEO Fender Musical Instrument

"The shows were great Danny was a pleasure to work with and we lok forward to having him return." - Martha Serrogy Director of Sales & Marketing Blue Note Hawaii

"Danny Seraphine has ALWAYS delivered like a true CHICAGO guy would! When Danny and CTA come to our theatre it is always a sure sell-out! And nobody is more generous with the press and the fans as Danny Seraphine! Can't wait to "Take Him Back to Chicago"! - Ron Onesti, President The Arcada and Des Plaines Theatres

"WE TRULY ENJOYED HOSTING Take Me Back to Chicago Tour at The Savannah Center, The Villages, FL - Feb. , 2020. Sold out two shows, for a combination of 1500 seats total! Danny & CTA it is a pleasure to work with and we look forward to finalizing your return engagements for our 2021/2022 season." - Marina Caldarella, Executive Assistant / Entertainment Manager Victory Productions & Vincero Entertainment

Rock and Roll Hall of Fame Inductee (April 8, 2016) as a member of Chicago

- May 9, 2015 the City of Chicago dedicated the 3500 block of North Normandy Avenue on Chicago's northwest side "Honorary Danny Seraphine Way"