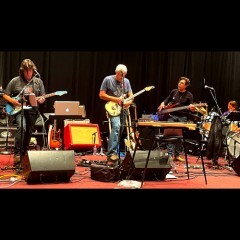 The Gilmour Project incorporates acclaimed musicians whose background is both prog(ressive) and improvisational.

The improvisational ‘jam gestalt’ of the legendary Blue Floyd, which both Pevar & Prince performed with, matched with Pink Floyd deep tracks, hits and fan favorites, including solo Gilmour gems, and accompanied by ‘Floydian’ audio FX from Paul Simon producer ‘The Duke of New York’ (Graceland: The Remixes) is the collaboration which is The Gilmour Project.