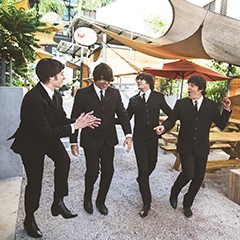 "The solo hits from John, Paul, George and Ringo!! From "Imagine" to "Silly Love Songs", from "Band On The Run" to "My Sweet Lord", from "It Don't Come Easy" to "Starting Over"..... and everything in between! A rockin' trip through the outstanding legacy of The Beatles....AFTER The Beatles!!"

Out of sunny Puerto Rico comes The Jukebox Beatles!! A Beatles tribute like no other! For 18 FAB years, The Jukebox Beatles have successfully integrated three generations of Beatlefans. Their live shows stand out for their faithful and exact rendering of The Beatles’ music. Their versatility is what sets them apart from other groups by recreating the spirit and the magic of The Beatles through the most important element: the music.

An authentic reproduction of the music of The Beatles!! Complete with Beatle suits and the same models of guitars, drums and bass that the Beatles used. The Jukebox Beatles is an Award-winning band with countless sold out shows and festival appearances in the United States, Argentina, Dominican Republic, St. Marteen, Panama, Guatemala, Canada and Liverpool, England. Note for note recreations of the Beatles most loved songs, from their early hits like "I want To Hold Your Hand" and "Twist and Shout" to their last classics like "Let It Be" and "Hey Jude". Even pre-Beatlemania and solo material!! The Jukebox Beatles is not a mere imitation...it's a tribute!!

First Ever Puerto Rican Band to play at the legendary Liverpool clubs "The Cavern Club", "The Casbah Coffee Club" and the "Lathom Hall", the places where The Beatles started.
Liverpool, England. August 2008 & 2011