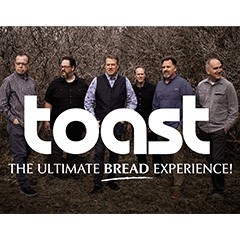 TOAST is a live band of experienced musicians who faithfully re-create all the hits of the 70s hit band, Bread, as well as the solo work of its founders David Gates and James Griffin. With a surprising fidelity rarely heard from a live tribute band, their sound is often described as "spot on" to the original recordings. Audiences everywhere rave about how closely their live perfor­mances sound like the cherished records they listened to back in the day.

Bread was founded by David Gates and James Griffin and, as radio's original soft-rock band, quickly soared to the top of the  charts in 1970 with their first hit, "Make it With You". Bread continued to burn up the radio for the next decade! Over their career, 13 of their hits landed on Billboard's Top 100!!

Even today, TOAST audiences bring a contagious enthusiasm for the unmis­takeable sound of Bread's many hits, such as...

Make It With You

It Don't Matter to Me

Lost Without Your Love

TOAST brings all the memories flooding back: Whether a first kiss, a rough break-up, or the thrilling memories of a lost love, TOAST brings it all roaring back with their fun, family-friendly performance.

Bring TOAST to your next event!