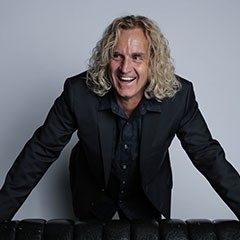 Scheff joined the group in 1985 replacing the iconic vocalist/bass player Peter Cetera going on to be one of the principal songwriters and main contributors throughout Chicago’s career. Scheff’s songwriting, vocals, and musicianship helped create the most successful recording era of Chicago, the 80s and 90s including hits such as...

Scheff is also the voice across 4 decades, the 80s, 90s, 2000s, 2010s, performing all the classic Chicago hits in thousands of concerts, television appearances, (most notably his blistering performance of “25 or 6 to 4” at the Rock and Roll Hall of Fame ceremony for Chicago’s induction in 2016.

CHICAGO is the Top American Band in Billboard chart history and #4 overall, behind the Beatles, the Rolling Stones and the Bee Gees

“When I knew I wanted to pursue music as my lifelong career as a young boy, Chicago was my band. Chicago 16 and 17. Those records made me want to do this. When I found out Peter Cetera had left the band in 1985 I was crushed. I thought my band was over, for good.

Then, in 1986 Chicago 18 was released and I found out they had a new guy. I thought it would be impossible. The video for “Will You Still Love Me” came on MTV and I ran into the next room telling my mother, They found the guy! Jason Scheff! It’s going to work!”