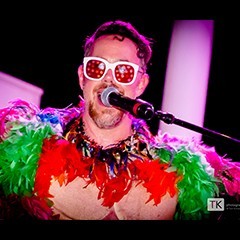 Joel Mason is a 30-year self-taught musical comedian. After “paying his dues” in various country and rock bands around the country, he decided to develop his first stage show:  Joel Mason’s Tribute to Elton John.  Within a couple of years, Joel Mason was one of the most sought-after tribute performers in the world with the help of the global television exposure he acquired after MTV/VH1 produced a documentary about Joel’s life as an Elton John tribute artist, which included interviews from Elton John. As a direct result of the broadcasts, Joel landed a short tour of Denmark performing with a 100 piece symphony for the Danish Queen and over 40,000 people at 3 different castles. During this time, Joel was becoming one of the most popular corporate event and cruise ship headline performers in the world with his Elton John Tribute show, as well as his new productions, including his Tribute to the Eagles, and his Rock & Roll Sitcom: Joel Mason & Friends, as well as writing comedy and co-producing shows for other touring entertainers. Joel currently contributes his musical and comedic talent and 15 years of cruising experience to the largest charter company in the world, TimeLife Cruises, where Joel has worked and performed directly with some of his favorite performers such as Earth Wind & Fire, Gladys Knight, Kool & the Gang, Patti LaBelle, War, Billy Paul, Jeffrey Osborne, David Sanborn, Marcus Miller, Jonathon Butler, Dave Koz, Brian Culbertson, Dion, George Benson, Frankie Avalon, The Drifters, Chubby Checker, Bob James, David Brenner and many more.

Joel also performs Dueling Pianos with some of the world’s greatest piano performers in his hometown of Las Vegas where he lives with his wife and daughters.