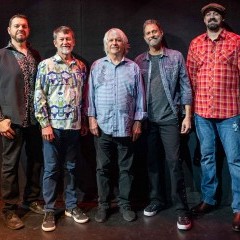 From their beginnings in mid-Sixties Ohio as a group of friends playing cover tunes to the present-day unit featuring founding member/pedal-steel innovator John David Call, veteran bassist Mike Reilly, propulsive drummer Scott Thompson and guitar ace Donnie Clark, PURE PRAIRIE LEAGUE continues to embellish the rich 43-year history of one of Country-Rock’s pioneering forces. As one reviewer recently wrote: “PPL’s sound combines sweet memories with edgy, contemporary muscle. Their vocals are as strong as Kentucky moonshine and the musicianship and performance skills are as sharp as a straight razor”.

Their eponymous first album - featuring the Norman Rockwell/Saturday Evening Post cover that introduced fans to PPL’s trademark cowpoke “Sad Luke” - has been hailed as a “major early influence in the emerging popularity of Country-Rock music”. Their second effort, the multi- platinum “Bustin’ Out” brought us the Craig Fuller-penned classic “Amie”, along with other gems of the genre. With “Two Lane Highway”, nine more albums and countless shows, a legacy has been forged and enriched during the

Now in their fifth decade, Pure Prairie League continues to lead the way for the new generation of Country/Rockers such as Keith Urban, Nickel Creek, Wilco, Counting Crows and so many others that cite PPL as a major influence.

As crisp and clean as spring water and as comfortable as a well-worn cowboy shirt, Pure Prairie League still brings it all back home.