The Guess Who Have It All 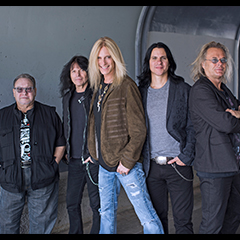 Let’s start with those iconic hits, the kind that everyone (and we mean everyone) knows all the lyrics to. And then there are the adoring fans, some who have been there since the beginning and some who have just discovered their music. The awards. The sold-out concerts throughout the world. The fame and fortune. But as we chatted with original member of The Guess Who Garry Peterson recently, we realized that what might be most important, most precious and most rewarding for the band is their friendship. Garry, Will Evankovich, Leonard Shaw, Rudy Sarzo and Derek Sharp simply enjoy being around each other, whether they're touring, cruising or recording their latest album together.  We got a peek into that camaraderie during their All Access Pass interview on the 2018 ‘70s Rock & Romance Cruise and we hear it in “The Future IS What It Used to Be.”  Speaking of that amazing album…

“If you listen to the first song on the album, the lyrics express that the only way we can thank our fans for supporting the band is by going onstage,” explains Garry. “Never mind the money, we did it for the love” propels the chorus of “When We Were Young,” bursting with the kind of emotion that ran through the recording sessions for “The Future IS What It Used to Be.”

“It was an emotional experience,” he reveals. “As I went through the process of recording it was like I went back 40 or 50 years in time. We have a lot of hit records and we play them in concert all the time and they’re great, but there is something about an artist that wants to create new artwork.”

Throughout the writing and recording process for the album, the band thoughtfully crafted the new songs while paying homage to their history. “The whole album was recorded on the same kind of equipment we recorded all our hit records on,” Garry says. “It was analog, not digital. All the bands we were listening to when we were growing up - the Beatles, the Stones, The Who, the Eagles - all of those influences are on the album. It takes people back to that era, for not only those who remember being there but also for those young people that we meet at our shows who say they wish they were born during that amazing moment in time.  Even the album cover reminds me of all the albums I used to buy with a picture of the band actually playing on it.”

About that album cover…the photo was taken during Garry’s first-ever video shoot in a train graveyard outside of Las Vegas. “The concept is that we’re looking back at our early years in music and the culture that surrounded it...how we dressed, the cars we drove, where we hung out. It’s also a way to express how amazed we are to be where we are now.  Music has been my whole life since I was four years old and I could have never predicted all of this.”

Fans have embraced the songs from “The Future IS What it Used To Be,” including ‘70s Rock & Romance Cruise guests who got a sneak preview when The Guess Who played two of them onboard in 2018, long before the album was released.  “It’s amazing to put those songs amongst hits that have been played on the radio for 50 years and have audiences respond so strongly to them. It’s important for us to show the audience a little bit of who we are today and show the common thread running through the songs from the early years up until now.”

And what keeps bringing The Guess Who back to the ‘70s Rock & Romance Cruise? “About 15 years ago, we made it a point to sign autographs after our shows. That’s where you find out what those songs have meant to people.  And there’s more time for that kind of interaction on the cruises, where an artist gets to get insight into what their music has meant to people, and that’s pretty powerful.” Garry also revels in hanging out with his bandmates throughout the week. “This has given me a new lease on life and it’s really because of these guys, I’m very happy,” he said during the 2018 ‘70s Rock & Romance Cruise, a feeling he still echoes today. “We have a lot of talent in this band. It’s a joy to work with great talented people who are actually wonderful people, aside from music.”

If you haven’t yet, book now  to see The Guess Who LIVE and take advantage of convenient payment plans that allow you to stretch your payments for over a year! Plus, remember, if you've ever sailed with us on any StarVista LIVE cruise, you are eligible for special alumni pricing when booking the 2022 voyage.